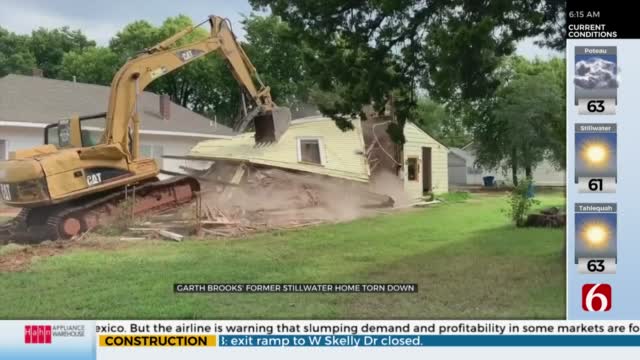 A Stillwater landmark is in "low places" this morning. The house where Garth Brooks lived right before he became one of country's biggest stars has been torn down.

Anyone who has spent time in Stillwater has likely passed by the little, yellow house on Duck Street that had the words "Garth Brooks lived here 1987-1988" painted over the porch. Those words made the old house a bit of a roadside attraction.

On Tuesday, The O'Colly's editor in chief, Ryan Novozinksy, shared pictures and videos on Twitter showing an excavator tearing the historic house apart.

The property manager told the O'Colly the house was built in 1908 and had structural issues, so they had to tear it down.

Garth and his first wife lived in the house for a year after he graduated from OSU -- just before they moved to Nashville.

Blame it all on their roots, but seeing the house demolished made a lot of folks sad and nostalgic.

The property manager told the O'Colly they kept the sign and they plan to hang in their office, but said if Garth ever comes back they'd give it to him.