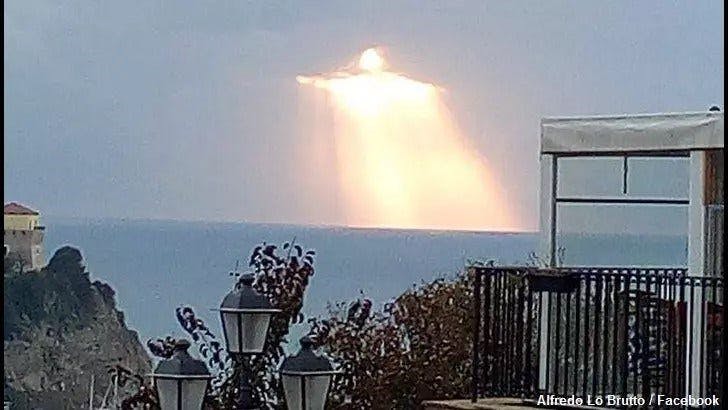 An artist in Italy could not believe his eyes when he looked at the setting sun and saw that it had taken on the appearance of a heavenly figure. Alfredo Lo Brutto reportedly snapped a photo of the stunning scene last Saturday in the town of Agropoli. "As soon as I saw that luminous image," he recalled to an Italian television program, "I felt a great need to take it and share it."

As such curious images tend to do, the photo quickly went viral with many observers comparing the image to the iconic 'Christ the Redeemer' statue in Brazil. The resemblance was echoed by Lo Brutto, who mused that the spiritual-looking anomaly appeared as if it "wanted to bless the whole city of Agropoli" by way of its outstretched arms.

For their part, residents of the community are largely split over the meaning of the strange sunset, with some suggesting that it was a divine event and others dismissing it as merely a meteorological oddity. Be that as it may, Lo Brutto marveled that "this intense experience and the strong feelings I felt" gave him "an even greater religious faith."